Are we doing enough? A 2020 Update on Pig Confinement | Winnipeg Humane Society
Skip to content

Are we doing enough? A 2020 Update on Pig Confinement 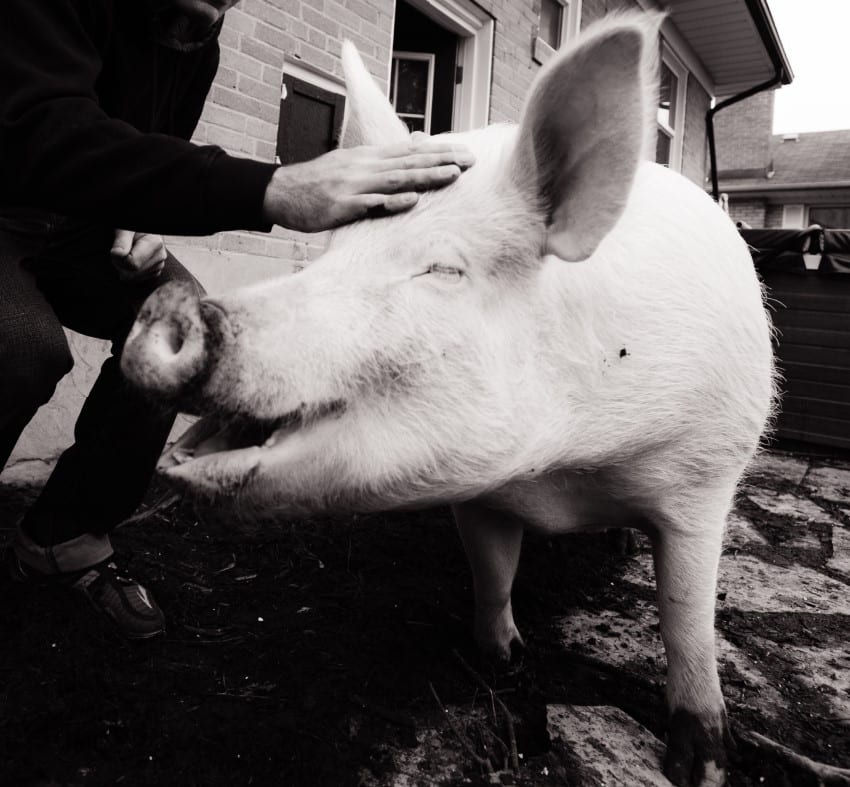 When it comes to discussing the welfare of pigs in agriculture, it is crucial to remember that the aspect of housing is only one small aspect of their overall welfare. Pigs are incredibly intelligent animals that have evolved to carry out a wide range of complex, instinctive behaviours in a very specific manner. All of which intensive farming practices deny them. In Manitoba alone, there are approximately 8 million pigs at any given time.

Intensively confined pigs do not get to live as pigs, which includes being able to walk, nest and bond with their piglets. How can any animal, for that matter, ever be humanely cared for, when the most basic behaviours are denied?

It’s now been six years since the National Farm Animal Care Council revised their Codes of Practice for the Handling and Caring of Pigs. Unfortunately not legally binding, the codes act as management guidelines for producers to follow and abide by.  Among the revisions was the requirement to phase out gestation crates and provide all sows with alternatives like group housing by 2024.

Any long-term supporter of the Winnipeg Humane Society is likely aware of our past campaign work, most notably from our ‘Quit Stalling’ campaign, where we advocated against the housing of sows in gestation crates. With six years now passed since the code amendments, has the industry implemented these changes?

Manitoba Pork has released a booklet entitled ‘Options for Successful Group Housing of Sows’ as a guide to assist producers with the transition, as there are various methods listed to successfully convert a barn to group housing. The guide outlines the importance of decreasing fighting between pigs, ways to ensure that all sows are getting adequate nutrition, etc.

Within the guidelines, Manitoba Pork claims that over 85% of Manitoba’s approximately 8 million pigs are already group housed, however this statistic is mainly referring to nursery and finishing barns that hold piglets. This is not an accurate representation of how sows are kept.  In fact, according to the National Sow Housing Conversion Project, only roughly 20% of Canada’s 1.3 million sows are currently housed in groups. From a welfare perspective, this number is hardly high enough when we consider how damaging gestation crates truly are for the sows inside them. It is also important to note that this does not lesson the fact that sows will still spend time strictly confined in farrowing crates, which are just like gestation crates. The only difference being that farrowing crates include a small creeper area for the sow’s piglets to nurse from their mother.

Two questions remain: Is group housing truly a win in the grand scheme of things? And should the proposed shift to group housing by 2024 be considered enough of an improvement for one of the smartest animals in the world?

The single easiest way to help industrially farmed pigs is to stop eating them. Consumer demand for pork and other pig products is the most effective means to reduce the number of pigs raised in factory farms. With the amount of plant-based alternatives now available, it has become easier than ever to enjoy plant-based bacon and other products while leaving pigs off of your plate.

Alternatively, if you aren’t ready to give up pork, it is crucial for consumers to start sourcing their pork products from small-scale local farms that allow their pigs to live as pigs are meant to. For more information about small-scale farming, and for a listing of local, small-scale farms, visit: www.directfarmmanitoba.ca

Be sure to stay tuned to the Winnipeg Humane Society’s social media for new updates and accomplishments as we continue to advocate for the welfare of Manitoba’s pigs in 2020.  To learn more about how you can help Canada’s industrially raised pigs, please email us at: animalwelfare@winnipeghumanesociety.ca