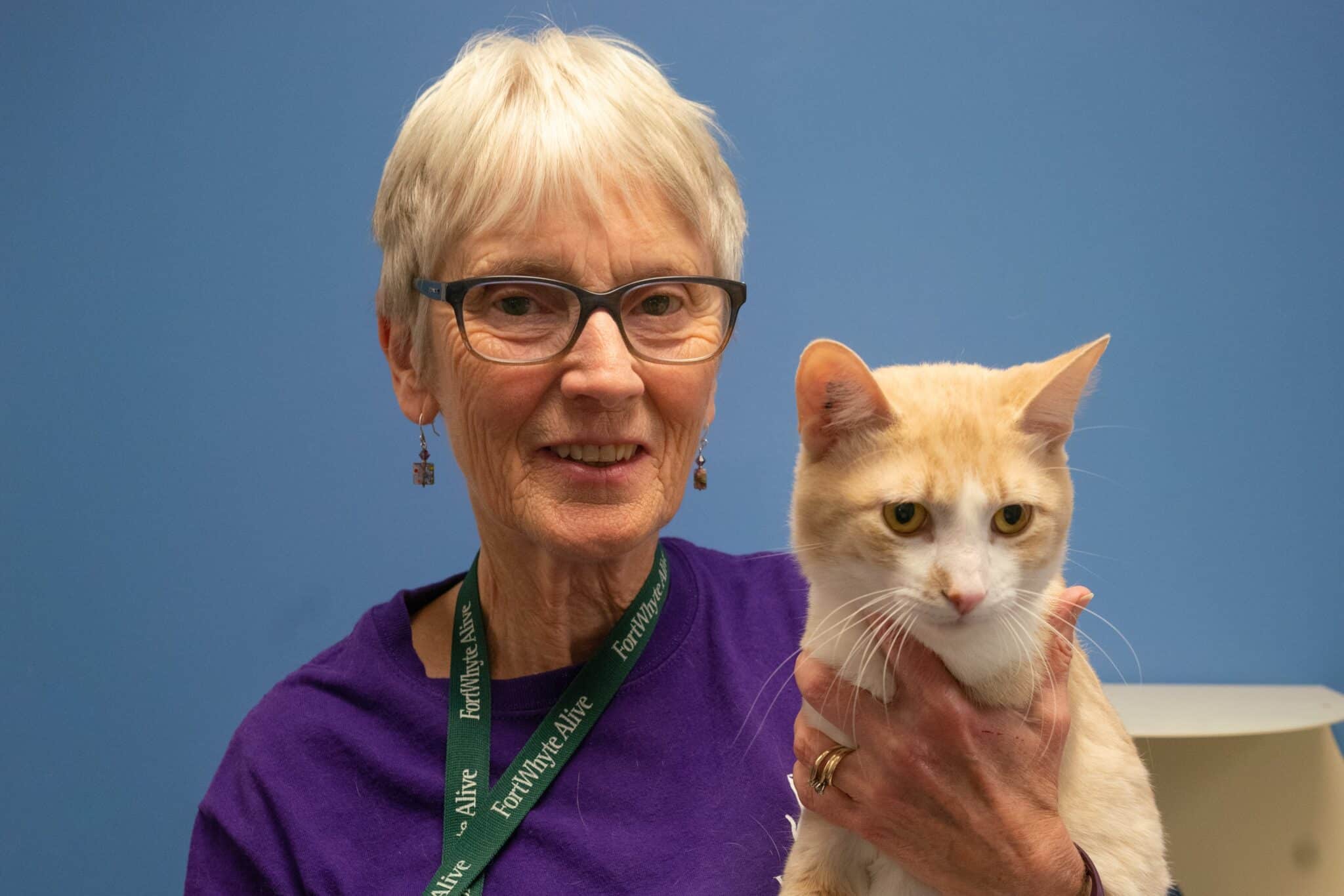 One could never accuse Heather Anderson of easing into retirement. If anything, it’s diversified her interests and made her busier than ever.

She recently celebrated her 10th year of volunteering at the Winnipeg Humane Society. In addition to her Tuesday afternoon shift, in her ‘spare time’ she also volunteers at Fort Whyte Alive, a food bank, walks several times a week for exercise, takes 55+ university classes and more.

Her WHS involvement started with a visit. “I had got together a bunch of old towels and sheets and that sort of thing,” she explained. “I hadn’t seen the new building and I said to my husband ‘let’s take this stuff over to the Humane Society because they always need these things and we’ll see what it’s like’. I got there, and I thought ‘you know, I could help here.”

“Many people ask, ‘don’t you always want to take all the animals home, or doesn’t it bother you to see all the animals there?’’ she continued. “Instead, I saw some very happy people trying to help the cats feel more comfortable in their surroundings. I decided I would like to be part of that.”

She retired in the spring of 2009 after 19 years in the school programs area of The Manitoba Museum and in the fall of that year joined the WHS.

“When I first started, I worked a Thursday shift and, in the summers, it conflicted with cottage plans, so I took summers off. Now, I volunteer on Tuesday afternoons which is perfect all year long,” Heather said.

“My husband volunteers at the airport as a Goldwing Ambassador on Tuesday mornings and after he’s done, I come here.”

Heather has always worked with cats during her decade with the WHS. She began as a Cat Cuddler, then helped with Cat Enrichment and now is a Feline Behaviour Assistant (part of the Behaviour Department). She loves all animals but thinks she’s “better sized” to work with cats.

“Many of the dogs here are quite big,” she laughed. “Being a small person, I could picture some of them dragging me along on walks.”

She and her husband currently don’t have pets, but they’ve had both dogs and cats over the years. They do enjoy dog-sitting her son’s 15-year-old Border Collie, Spy. As a young child, she had a pet dachshund and when she was 18 she was given a Siamese cat (Tai Tai) for Christmas. The cat lived to the grand old age of 20.

She works with select cats that need extra attention while they’re staying at the Humane Society, playing and visiting with them and keeping track of their behavioural growth. She’s interacted with hundreds of cats over her decade but there’s one from her early years that stands out.

“Curtis was a great big black cat,” she said. “He had a paw that was turned under due to a genetic defect, but he was so very friendly and loving. He did not get adopted for a very long time but during one cat giveaway weekend, a young boy in a wheelchair adopted Curtis. I was so happy because I knew the young boy had got a great companion.”

And while she enjoys all the cats, she has a special place in her heart for the older ones. “I always feel sorry for them –the ones who come in at 10 or 11 years old and don’t know what’s hit them. It’s nice to see them get adopted,” she explained.

Heather enjoys the comfortable atmosphere at the WHS. “I think that’s why I really like Feline Behaviour,” she said. “I’m talking with and getting to know more staff and other volunteers. The behaviour staff are very knowledgeable and caring. I find it very relaxing to interact with the cats and it gets me my animal fix.”

“You have enough people to talk to, but I don’t necessarily mind working by myself with the cats. And no one looks at you like you’re crazy if they see you talking to the cats,” she laughed. “What I tell other people is that if I wasn’t here, the cats wouldn’t be getting that attention. The cats benefit because they’re in a place where they’re comfortable and people care for them and want to make them happy.”