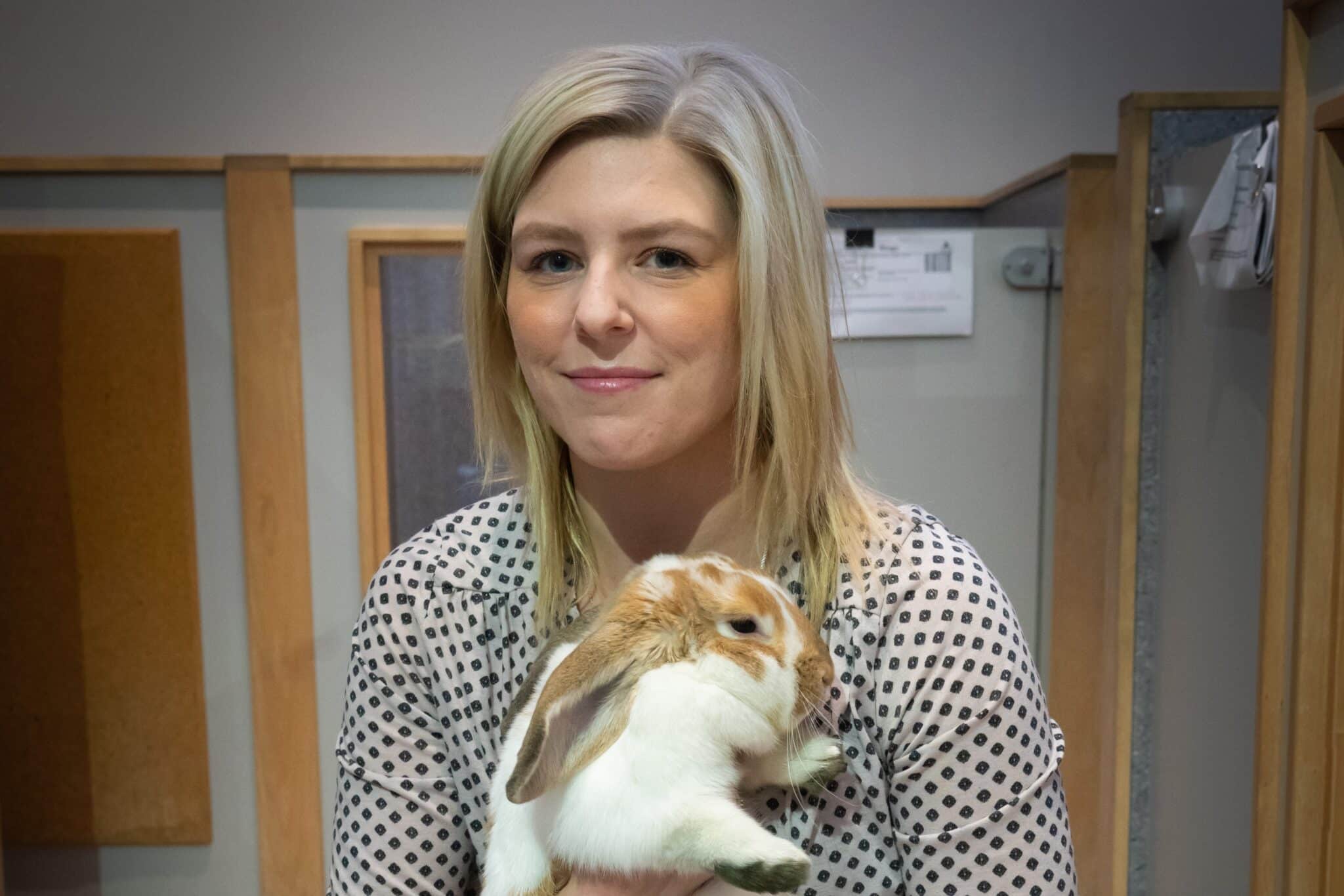 Having her first pet rabbit as a child gave Tracy Groenewegen a love for the long-eared, hippity-hopping creatures. It’s an affection that has carried on to this day in her volunteer role as a rabbit wrangler with the Winnipeg Humane Society.

Tracy got her first rabbit at age eight. They spent many formative years together, with the rabbit passing away when Tracy was in her first year of university. “He lived to almost 14,” she explained.

“In fact,”she continued, with a laugh. She pointed to a WHS poster. “I adopted the rabbit who’s now immortalized on this sign. Her name was Dusty at the time (Tracy renamed her Penny). Her previous owners had apparently surrendered Dusty because they felt she was too big. But she came in fully litter trained and she’s not scared of people. She just melts on the ground when you pet her and that’s when I knew she was right for me. That’s not common for rabbits.”

Tracy began her volunteer work at the WHS in December 2016. “Until this January I was living in an apartment that would not allow pets, so I started here in order to get my ‘rabbit hit’ every week. It’s worked out well. I now have a rabbit again. I adopted Penny in February.”

“When I came here it had been a while since I’d volunteered,” she explains. “I had served on boards of organizations, but I hadn’t done much hands-on work and I missed that. I also missed my connection with rabbits. I came here and I was surprised that there were rabbits in the shelter so I knew this was a place where I could help out.”

Tracy and I spoke while she was working in the rabbit area of the shelter. Some of her time was spent cleaning up after one bunny that was making its mark repeatedly on the floor outside of its cage. Time to pick up a broom…

Tracy acknowledges that rabbits are known for making a mess, but that’s a stereotype that’s not always true. Rabbits can be trained to use the litter box, making messes much less frequent.

Rabbit wranglers’ job is to let the rabbits out of their cages to give them some ‘out time’ while still in the rabbit area of the shelter. A little clean up work is involved but most of the time is spent socializing the rabbits and getting them used to people. She says there are usually three or four rabbits at any one time as well as a couple of guinea pigs. The guinea pigs are much more reserved, Tracy says. They usually hide in their enclosures.

She likes the different personalities of the rabbits. ‘Some are super gregarious and very sociable while others are sleepy and rest a lot,” she says. “When they get out,they’ll use it to explore the area and then they’ll rest.”

You’ll know a rabbit is happy when it does a binky, according to Tracy. A rabbit binky is when they jump and twist their body in the air, sometimes in both directions before landing. “it’s a sign of being happy and energetic, and it’s so funny,” she says. People who come into the area are often surprised to see the rabbits’ personalities and to learn how big they can get. Tracy says rabbit personalities are somewhere between those of dogs and cats.

“Depending upon how much attention they want, they can be like a dog,” she points out. ‘Some just want to be left alone, kind of like a cat. Some can be feisty while others are gentle and like human attention.”