National Indigenous History Month: The Past and Present Role of Dogs 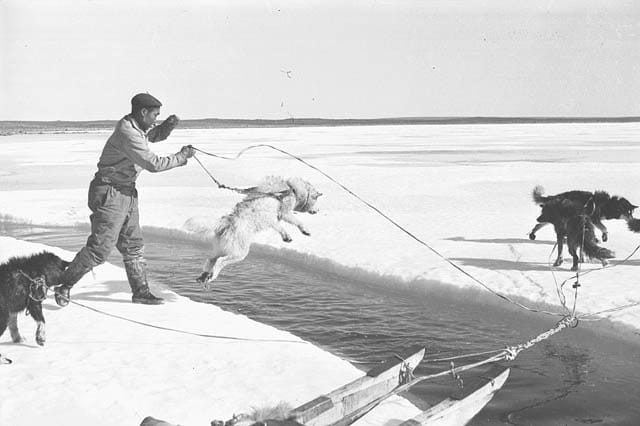 June is National Indigenous History Month, which honours the history, diversity, and heritage of Indigenous peoples in Canada. The Winnipeg Humane Society works closely with Indigenous communities to provide veterinary services to under-serviced communities in Manitoba.

Indigenous peoples have a long-standing history of dogs being part of their communities and their world views, and the Winnipeg Humane Society recognizes the human-animal bond as an important part of Indigenous History.

For Indigenous History Month, we want to highlight the historical role dogs have played in Indigenous communities.

Historically, dogs were used for transportation, hunting, protection, and companionship[1]. For Inuit, for example, qimmiit (sled dogs) were used for transportation, safety, and hunting. Qimmiit had keen senses and were able to find their way home or to a hunting camp during a snowstorm. They could also sense where the ice was thin and could then avoid that area when traveling over frozen lakes. Qimmiit were also able to scare off polar bears and help with seal hunts by sniffing out the seals’ breathing holes[2]. For many First Nations, dogs were equally important, and were also used for hunting and protection.

Today, dogs are mostly companion animals, yet they can still represent a connection to traditional ways of life. The Winnipeg Humane Society acknowledges the historical relationship between Indigenous peoples and dogs in Canada when we visit Indigenous communities. As we continue to deliver veterinary services in remote communities, we aim to continue to learn about the role dogs have played and continue to play for Indigenous peoples in Manitoba.