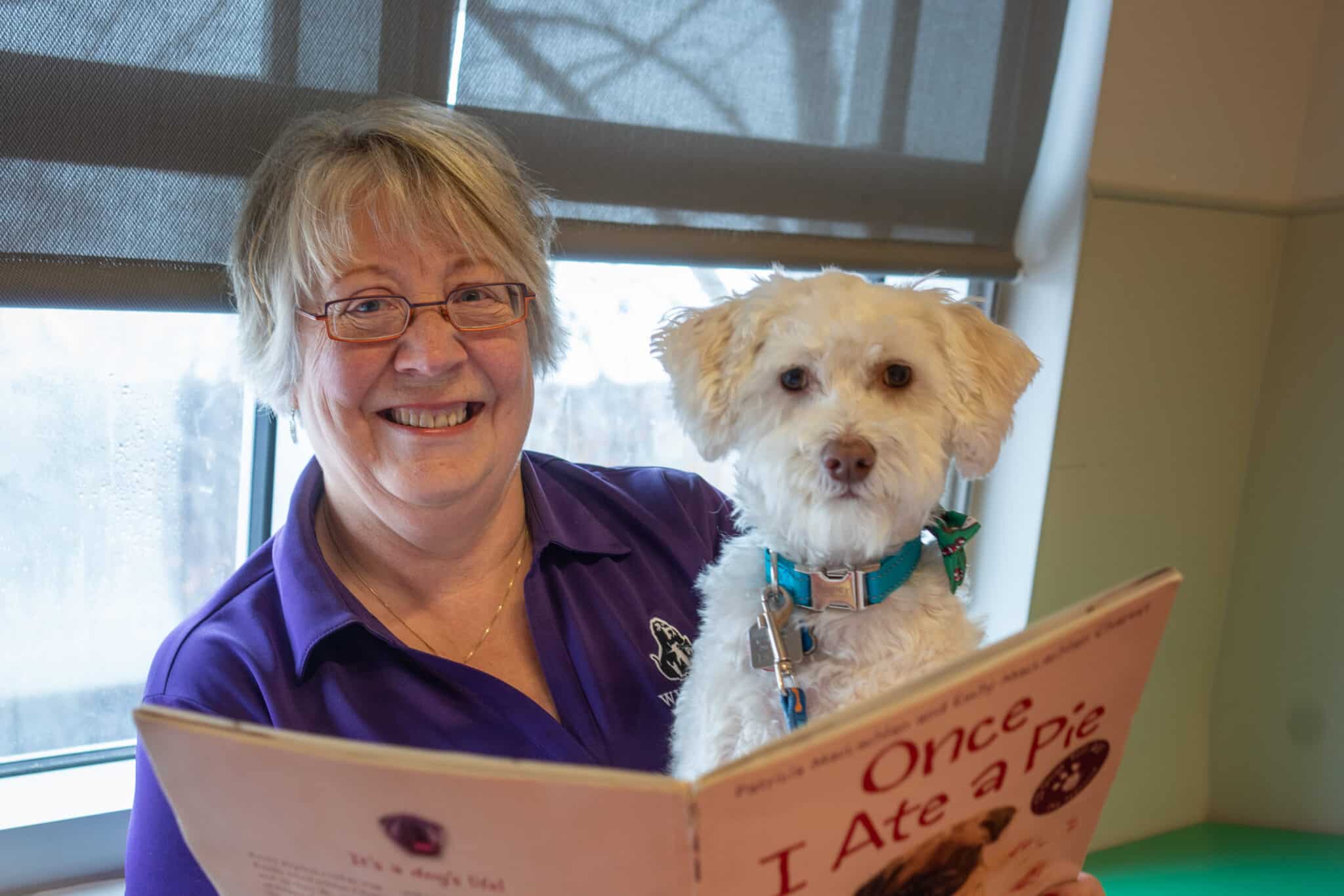 Each week, Dog Team Ambassador Eva and Barney hit the road to visit with people who can use the company. Twice a week, they take part in the See Spot Read program for children. The children interact with the dogs and even read to them. They also volunteer with the DASCH program for the intellectually challenged, through the WHS.

Their scope of their volunteer work goes beyond the WHS, however. They also give of their time to St. John’s Ambulance. They visit nursing homes, schools, Ronald McDonald House and the airport.

“We do a lot sometimes,” she said, with a laugh and a wry smile. “My one day a week (of volunteering) is almost four or five days sometimes.”

“But we enjoy it. We’ve done the Kids in Care picnics at The Forks. We’ve gone to Red River College and the University of Manitoba to soothe and de-stress the students at exam time.”

Barney is a five-year-old schnoodle (a schnauzer-poodle cross), Eva explained. He has his therapy dog certification through both the WHS and St. John’s Ambulance. They’ve been volunteering with the Humane Society for almost two years.

“When we first got him as a puppy we took him to obedience school,” Eva said. “We worked with him to make sure he’s not aggressive, that he’ll listen and that he’s okay with people around him.”

Eva was retired for a year and working with a therapy dog was something she’d always had in the back of her mind – if they had the right dog. “I took Barney to the St. John’s Ambulance and had him tested and got him accepted for the training,” she said.

Eva’s husband Bruce said they were told when Barney was very young that he was a special dog. “On the very first day that we had him, we were told by a dog handler/trainer that we have a very gifted dog and that he has a purpose,” said Bruce. “I asked the fellow, ‘How can you tell?’ and he said it was the way he was sitting in our arms – that’s a very intelligent dog.”

“He’s an amazing dog,” Eva said, proudly. “He doesn’t have a mean bone in his body. He goes up to everybody and wants to give him or her hugs. The kids just love it. The children at See Spot Read will ask for a hug from him. And, he seems to know when someone needs a hug.” The only thing he doesn’t love, Eva said, is car rides. He’ll get in the car and go with Eva but doesn’t necessarily like it. Bruce laughed and said Barney may not like cars but he’s happy to snooze in the boat.

Eva loves animals and can’t remember a time when she didn’t have a dog or cat around the house – even the five years they spent living in South Africa.

A few stories illustrate how Eva (and Barney) feels about the volunteer work. “We’ve been going to one seniors’ home for a little over two years now and I don’t think anybody knows my name,” she laughed. “When you go in you hear ‘It’s Barney.’ You’ll hear them call out ‘Here comes Barney, Barney’s here!’”

She explained that a Pet Therapy Program in which she volunteers has 12 children who are not non-verbal but have limited vocabularies. “A few weeks ago I was ill and we couldn’t make it and apparently a couple of the kids took it badly that we weren’t there. To me, it’s such a thrill to see the change and the happiness that he brings to these children.”

Another story illustrates the connection they make with the children.

“We had one little boy who was very shut down and silent at the start but was making progress,” she said. “I have these balls that have questions on them. They are called thumb balls because when you throw them the ball and they catch it they have to answer the question that their thumb is on.”

“The question this boy got was ‘what would you take if you were going to the moon?”

“He thought about it and he said ‘Barney.’ I told him Barney would love that.  Then ‘Miss Eva.’ And then he thought some more and said ‘Chocolate.’ “I said why chocolate?”

“Cause I know you love it,” was his answer.

And like this little boy, the Education department appreciates Eva’s contributions. “Eva’s dedication to the Education department is amazing,” said Assistant Manager Danisha Jarrett. “She is always there to help in any way that she can, from going out to presentations for our WHS in your school programs and Pet Therapy sessions with her sidekick Barney to endless events. You can always count on Eva. She is one of the kindest, most compassionate people I have had the pleasure of knowing.”