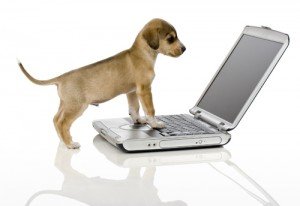 Although feeding time is important, it’s also vital to include petting, talking and playing, in order to help your puppy build good “people-skills.” Well-socialized mothers are more likely to have well-socialized puppies. Puppies are influenced by their mother’s calm or fearful attitude toward people.

Puppies are usually weaned at six or seven weeks, but are still learning important skills as their mother gradually leaves them more and more. Ideally, puppies should stay with their litter mates (or other role-model dogs) for at least 12 weeks.

Puppies separated from their litter mates too early often don’t develop appropriate social skills, such as learning how to send and receive signals, how to inhibit a bite, how far to go in play wrestling and so forth. Play is important to help puppies increase their physical coordination, social skills and learning limits. Interacting with their mother and litter mates helps them learn how to be a dog.

Skills not acquired during the first eight weeks may be lost forever. While these stages are important and fairly consistent, a dog’s mind remains receptive to new experiences and lessons well beyond puppy-hood. Most dogs are still puppies, in mind and body, through the first two years.

House training a puppy requires time, vigilance, patience and commitment. Following the procedures outlined below, you can minimize house soiling incidents, but virtually every puppy will have an accident in the house (more likely several). Expect this – it’s part of raising a puppy. The more consistent you are in following the basic house training procedures, the faster your puppy will learn acceptable behavior. It may take several weeks to house train your puppy, and with some of the smaller breeds, it might take longer.

Don’t give your puppy an opportunity to soil in the house. He should be watched at all times when he is indoors. You can tether him to you with a six-foot leash or use baby gates to keep him in the room where you are. Watch for signs that he needs to eliminate like sniffing around or circling. When you see these signs, immediately take him outside on a leash to his bathroom spot. If he eliminates, praise him lavishly and reward him with a treat.

When you’re unable to watch your puppy at all times, he should be confined to an area small enough that he won’t want to eliminate there. It should be just big enough for him to comfortably stand, lie down, and turn around. This area could be a portion of a bathroom or laundry room blocked off with boxes or baby gates. Or you might want to crate train your puppy and use the crate to confine him (see Crate Training Your Dog). If your puppy has spent several hours in confinement, when you let him out, take him directly to his bathroom spot and praise him when he eliminates.

Expect your puppy to have an accident in the house – it’s a normal part of house training a puppy.

It’s extremely important that you use the supervision and confinement procedures outlined above to minimize the number of accidents. If you allow your puppy to eliminate frequently in the house, he’ll get confused about where he’s supposed to eliminate which will prolong the house training process.

A puppy under six months of age cannot be expected to control his bladder for more than a few hours at a time. If you have to be away from home for more than four or five hours a day, this may not be the best time for you to get a puppy. If you’re already committed to having a puppy and have to be away from home for long periods of time, you’ll need to train your puppy to eliminate in a specific place indoors. Be aware, however, that doing so can prolong the process of teaching him to eliminate outdoors. Teaching your puppy to eliminate on newspaper may create a life-long surface preference, meaning that he may, even in adulthood, eliminate on any newspaper he finds lying around the house.

When your puppy must be left alone for long periods of time, confine him to an area with enough room for a sleeping space, a playing space and a separate place to eliminate. In the area designated as the elimination place, you can either use puppy pads or a sod box. To make a sod box, place sod in a container, like a child’s small, plastic swimming pool. You can also find dog litter products at a pet supply store. If you clean up an accident in the house, take the soiled rags or paper towels, and put them in the designated elimination place. The smell will help your puppy recognize the area as the place where he is supposed to eliminate.

Your dog may have an excitement urination problem if:

What to do if your dog has an excitement urination problem:

Other types of house-soiling problems

If you’ve consistently followed the house training procedures and your dog continues to eliminate in the house, there may be another reason for his behavior.

House soiling can often be caused by physical problems such as a urinary tract infection or a parasite infection. Check with your veterinarian to rule out any possibility of disease or illness.

Some dogs, especially young ones, temporarily lose control of their bladders when they become excited or feel threatened. This usually occurs during greetings, intense play or when they’re about to be punished.

Dogs sometimes deposit urine or feces, usually in small amounts, to scent-mark their territory. Both male and female dogs do this (see Territorial Marking Behaviour in Dogs).

Dogs that become anxious when they’re left alone may house soil as a result. Usually, there are other symptoms such as destructive behavior or vocalization (see Separation Anxiety).

When animals become frightened, they may lose control of their bladder and/or bowels. If your dog is afraid of loud noises, such as thunderstorms or fireworks, he may house soil when he’s exposed to these sounds (see Fearful Dog Behaviour).

When puppies play with each other, they use their mouths. Therefore, puppies usually want to bite or “mouth” hands during play or when being petted. With puppies, this is rarely aggressive behavior in which the intent is to do harm. Because puppies are highly motivated to exhibit this type of behavior, attempts to suppress it or stop it are unlikely to be successful unless you give your puppy an alternative behavior.

The goals of working with this normal puppy behavior are to redirect your puppy’s desire to put something in her mouth onto acceptable chew toys and to teach her to be gentle when a hand is in her mouth.

Redirect your puppy’s chewing onto acceptable objects by offering her a small rawhide chew bone or other type of chew toy whenever you pet her. This technique can be especially effective when children want to pet her. As you or the child reach out to scratch her behind the ears (not over the head) with one hand, offer the chew bone with the other. This will not only help your puppy learn that people and petting are wonderful, but will also keep her mouth busy while she’s being petted. Alternate which hand does the petting and which one has the chew bone. At first, you may need to pet or scratch your puppy for short periods of time, since the longer she’s petted, the more likely she is to get excited and start to nip.

You must also teach your puppy to be gentle with hands, and that nipping results in unpleasant consequences for her. Teach your puppy that nipping turns off any attention and social interaction with you. After a nip, look your puppy right in the eye and yell “OUCH” as though you’ve been mortally wounded. Then ignore her. Leave the room if you must, but ignore her until she’s calm. Then try the chew bone and petting method again. It’s even better if you can coax your puppy into a sitting position using food. It may take many repetitions for her to understand what’s expected.

A note about children and puppies

It’s very difficult for children under eight or nine years old to practice the kind of behaviour modification outlined here.

Children’s first reaction to being nipped or mouthed by a puppy is to push the puppy away with their hands and arms. This could be interpreted by the puppy as play and will probably cause the puppy to nip and mouth even more. Dogs should never be left alone with children under ten and parents should monitor closely all interactions between their children and dogs.

When your puppy jumps up on you, she wants attention. Whether you push her away, knee her in the chest or step on her hind legs, she’s being rewarded for jumping up (even though it’s negative attention, she’s still getting what she wants).

When your puppy jumps up:

When your puppy realizes that she gets no attention from you while she’s jumping up, but does get attention when she stops jumping up and sits, she’ll stop jumping up. Remember, once you’ve taught her to come and sit quietly for attention, you must reward her behavior. Be careful not to ignore her when she comes and sits politely, waiting for your attention.

What not to do

Attempts to tap, slap or hit your puppy in the face for nipping or jumping up are almost guaranteed to backfire. Several things may happen, depending on your puppy’s temperament and the severity of the correction:

Puppies may be just as much work as human babies – maybe more so because puppies can’t wear diapers and they have very sharp teeth! It’s definitely true that, similar to infants and toddlers, puppies explore their world by putting things in their mouths. In addition, puppies are teething until they’re about six months old, which usually creates some discomfort.

Chewing not only facilitates teething, but also makes sore gums feel better. Although it’s perfectly normal for a puppy to chew on furniture, shoes, shrubbery and such, these behaviors can be a problem for you.

A puppy won’t magically “outgrow” these behaviors as he matures. Instead, you must shape your puppy’s behaviors and teach him which ones are acceptable and which aren’t.

What not to do

Never discipline or punish your puppy after the fact. If you discover a chewed item even minutes after he’s chewed it, you’re too late to administer a correction. Animals associate punishment with what they’re doing at the time they’re being punished. A puppy can’t reason that, “I tore up those shoes an hour ago and that’s why I’m being scolded now.” Some people believe this is what a puppy is thinking because he runs and hides or because he “looks guilty.” “Guilty looks” are canine submissive postures that dogs show when they’re threatened and not because they are feeling guilty.

When you’re angry and upset, the puppy feels threatened by your tone of voice, body postures and/or facial expressions, so he may hide or show submissive postures. Punishment after-the-fact will not only fail to eliminate the undesirable behavior, but could provoke other undesirable behaviors, as well.

Other reasons for destructive behaviour

In most cases, destructive chewing by puppies is nothing more than normal puppy behavior. Adult dogs, however, can exhibit destructive behaviors for a variety of reasons, which can occasionally be the cause of chewing problems in puppies, as well. Examples include separation anxiety, fear-related behaviors and attention-getting behavior. For help with these problems, check the pages in our Yelp Line or contact a professional animal behaviourist.